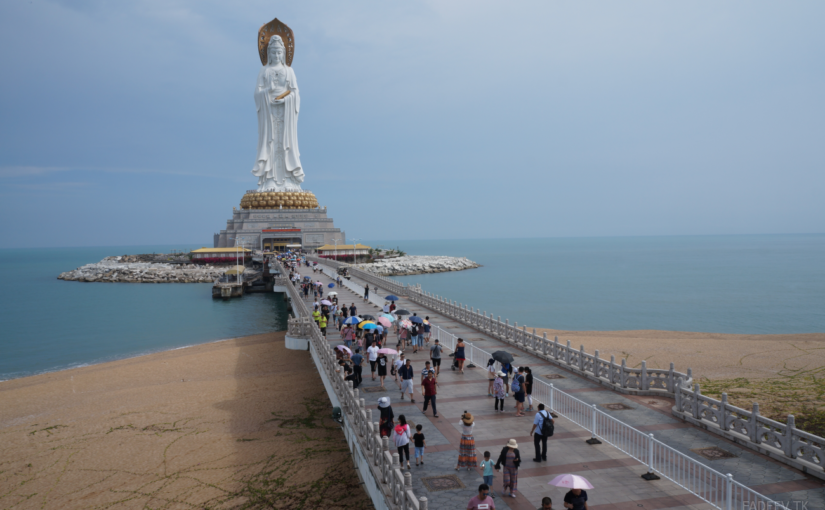 Today we will see Tree houses, a Buddhist tourist complex with a statue of the goddess Guan Yin, and even more views of Sanya city.

So, we walked to the tree houses, buying smoothies and cocktails on the way.

As i said in the first part – there are big problems with traffic regulations in China, and waiting at a pedestrian crossing (even regulated) can be very long. But here, a regulator appeared and when she saw the tourists, stopped the traffic.

Several blocks of houses-trees are occupied by hotel rooms, some of them apparently intended for apartments for sale and not sold out, or they are hotel rooms not commissioned.

As I wrote in the first part, many high-rise buildings in Sanya are free to enter and go upstairs. We walk to the end of the lobby, take the elevator, get off, another elevator – a service elevator, and here we are on the top floor.

Recently I was forwarded a video in Watsap about Wuhan, starting with the same frame as in the photo above. This is not Wuhan. 🙂

The following are photos from the Nanshan Buddhism Center, popular with Buddhists and ordinary tourists from all over the world. I don’t know much about Buddhism, so there won’t be many descriptions.

And here we come to the main attraction of this place, the statue of the goddess Guan Yin. This time I’m going to Google it to tell you a little bit about it.

The statue was built in 2005 and is 108 meters tall, 15 meters taller than the Statue of Liberty. The three-faced figure of the goddess of mercy is mounted on an artificial island. One of the faces faces the mainland, while the other two faces different sides of the South China Sea. Inside the statue is an active Buddhist temple.

The end of part two.